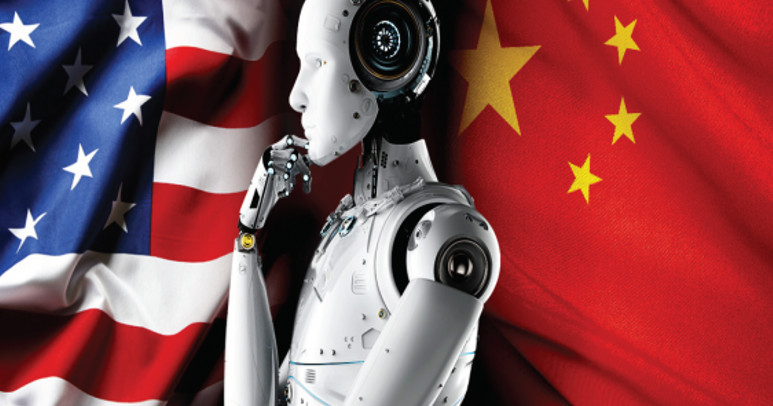 China and the U. S. Face-Off on the AI Battlefield

Trends’ January 2017 cover story addressed one of the most important trends we’ve ever identified, “Harnessing AI-Driven Growth.”   It explained how the commercialization of pervasive, low-cost artificial intelligence would soon enable a quantum leap in productivity and transform the global economy by 2034.  The focus of that segment was on the advanced OECD economies, but the message was certainly not lost on China.  At the very moment when that segment was being published, the Chinese government was putting the finishing touches on its own road map titled, the “New Generation Artificial Intelligence Development Plan.”  That document announced its plans to “lead the world” in artificial intelligence by 2030.

This should come as no surprise given China’s objective of displacing the United States as a global hegemon. And, just as a victory in the 20th-century cold war depended on technologies like microprocessors, Arctic oil drilling, and advanced materials, victory in the Sino-American Cold War is likely to require gaining or retaining clear leadership in AI, quantum computing, nanotech and biotech. Importantly, artificial intelligence like electricity, telecommunications, and railroads is an important “multiplier,” which makes other technologies more valuable.

In order to understand where China is headed, it’s important to consider the substance of its 2017 plan.

According to that plan, China intends to pursue cutting-edge advances in next-generation AI technologies in order to “occupy the commanding heights” of AI science and technology. The plan calls for progress in what it calls “AI 2.0” technologies, which include big data intelligence, cross-media intelligence, swarm intelligence, autonomous intelligent systems, and human brain collaboration with computers.  It particularly aspires to develop breakthroughs in autonomous learning, brain-inspired AI, and quantum-accelerated machine learning.   In doing so, it is clear that China plans to lead the world in “next-generation AI” and plans to devote extensive resources, including massive amounts of funding, data, and human capital, to this endeavor.

By pursuing this so-called “AI 2.0 agenda,” the Chinese government intends to leverage its rise in AI to enhance national competitiveness while bolstering its capacity to ensure state security and national defense. That means the Chinese Communist Party is seeking to direct the development of AI in accordance with the interests and imperatives of the “CCP.” Consequently, Chinese AI will emphasize a range of applications related to the domain of “social governance,” especially protecting public security and social stability.

Even in 2017 some of these AI applications were already being deployed, including the use of facial recognition to track down criminals and dissidents as well as attempts to predict future criminal behavior based on human behavior.  According to the plan, the Chinese government will leverage AI to create systems for intelligent monitoring, early warning, and control of perceived threats.

Concurrently, the Chinese leadership is working to ensure that advances in AI can be leveraged for national defense, through a national strategy for military-civil fusion. According to the plan, resources and advances will be shared and transferred between civilian and military contexts. This involves the establishment and normalization of mechanisms for communication and coordination among scientific research institutes, universities, enterprises, and the defense industry. Utilizing such approaches, China intends to apply new-generation AI as a “powerful support” to command decision-making, military deduction, defense equipment, and other areas.

However, repurposing breakthroughs in AI across domains is not turning out to be nearly as straightforward as the authors of the plan envisioned. Nonetheless, the People’s Liberation Army still seeks to leverage the available resources and advances to enable defense innovation and enhance its capabilities in so-called “intelligent warfare, potentially changing the paradigms of military power.

Strikingly, the “New Generation Artificial Intelligence Development Plan” lacks focus.  Unlike America’s  1060s Apollo project, it does not have a single clear goal.  In fact, it sounds like the technological equivalent of LBJ’s Great Society.  As pointed out previously in Trends, AI is a general-purpose technology that applies across many domains.   Rather than representing a single “core domain,” AI is a blanket concept covering natural language processing, computer vision, predictive analytics, and many other domains, each of which has dozens of different applications.

Because of the diversity of resources required, China’s central planning mentality creates a serious liability.  Given abundant capital and the kinds of targeted support offered by agencies like DARPA, the kind of spontaneous technological eco-systems we see in places like Silicon Valley are more likely to win the battle.

In fact, to seriously pursue leadership in all of these areas is likely to result in leading in none!

Put succinctly, the CCP sees leadership in artificial intelligence as crucial to ensuring stability at home and competing with the United States for global preeminence.  For those reasons, it is devoting enormous resources to assembling the talent and intellectual capital with it hopes to use to leapfrog American leadership in this technology.

First, China will achieve leadership in certain AI domains where the CCP can create a critical mass of expertise beyond that available elsewhere.

For example, China is likely already ahead in facial recognition or smart surveillance because it is perceived as crucial to the survival of the regime.  Facial recognition has a number of applications in smart security. It can be used for identity authentication - for example, on mobile phones. But even then, there can be security problems. What’s more, the technology doesn’t seem to have that many productivity spillovers to other industries. So, it’s not clear that being the leader in that area will yield broader economic or military benefits for China. And outside of such limited domains, Oxford’s Jeffrey Ding, perhaps the world’s foremost expert on Chinese AI research, reports that, as of 2020, “China is lagging behind the United States in every important metric except access to data.”

Across virtually every measure of competitiveness in AI including hardware technology, basic research, and commercial applications of the technology, China lags far behind the U. S.   For example, it occupies just 4% of the world’s AI-related hardware market, while the U.S. controls 50% of that market. In terms of commercializing AI, there are twice as many AI startups in the U.S. as in China.  This will be increasingly true as the Sino-American Cold War brings down a “technological iron curtain” preventing the flow of AI chips into China.

Third, the sheer volume of AI-related patents and publications will turn out to be a misleading indicator of China’s relative strength.

China has recently produced more AI-related patents and publications than the United States.  But a better metric is the demonstrated ability to apply innovations quickly and on a large scale. In the U.S., people can study machine learning and data science outside of formal educational institutions, in places like coworking spaces. This provides opportunities for creative applications of new technologies. In China, universities are developing their own “AI colleges.” At this point, it’s not clear which strategies for diffusing technologies into the mainstream will be most effective and which country will be most successful in adapting its institutions so that they can take advantage of AI.  However, the flexible, entrepreneurial American model seems intuitively more suited to applying a general-purpose technology across myriad applications.

Fourth, the real economic benefits of Artificial Intelligence will come from improvements in infrastructure and advanced products like autonomous vehicles, where the United States and Europe are leading in foundational technologies.

For instance, China lags far behind in open-source AI software and AI-related hardware.  With rising barriers to technology transfer, closing this gap by 2030 seems virtually impossible.

Fifth, because of structural economic differences between the U.S. and Chinese economies, China’s best chance for AI-based economic leadership is through enhanced manufacturing productivity.

China is trying to escape “the middle-income trap” and is hoping AI can help it boost its manufacturing outputs. By contrast, the United States is a service-oriented economy, where AI may be the key to improvements in enhancing back-end logistics, communications, transportation, and forecasting. So, neither country is likely to dominate AI generally, but both can lead in the areas that make the most sense for their particular economy.  And,

Sixth, rather than falling behind as some expect, the U.S. will extend its lead over China in AI.

Despite its stated objectives and vast pool of manpower, China is no more prepared to dominate AI in the 2020s than the Soviets were to dominate space in the 1960s.  Today, the relative positions of the U.S. and China in AI practice and expertise, remain broadly the same as in 2017.  Looking ahead, the United States, with its research universities and open innovation ecosystem, has important structural advantages that will enable it to attract the best and brightest, both at home and through its alliance.  This means that when it comes to AI, China must be monitored and countered, but not feared.