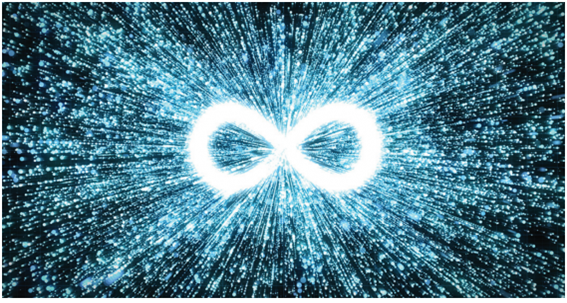 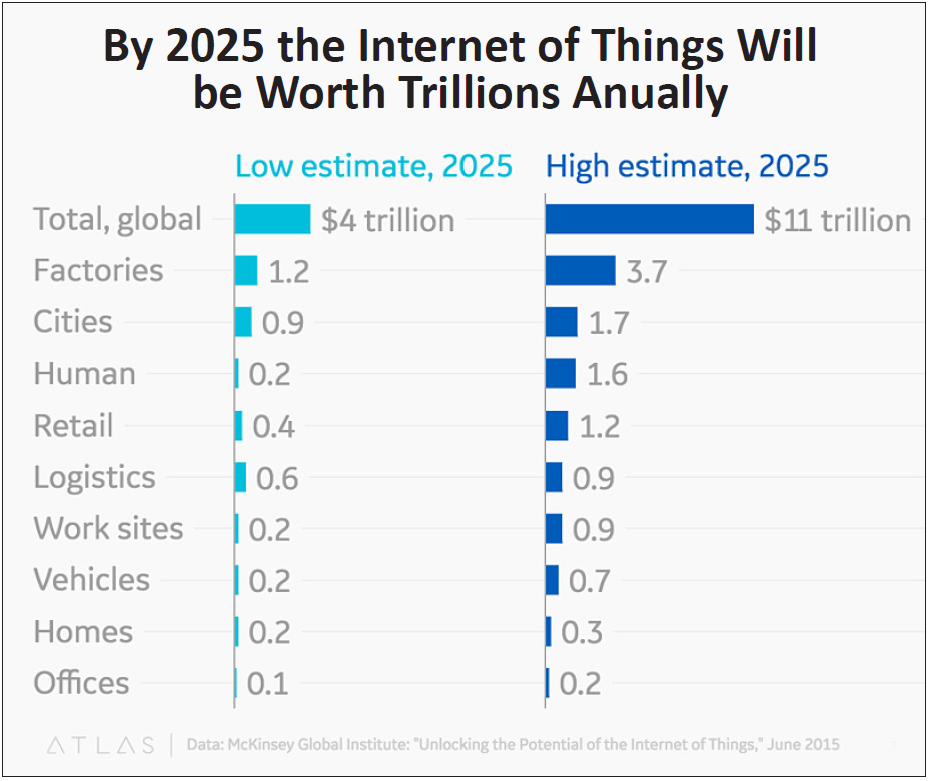 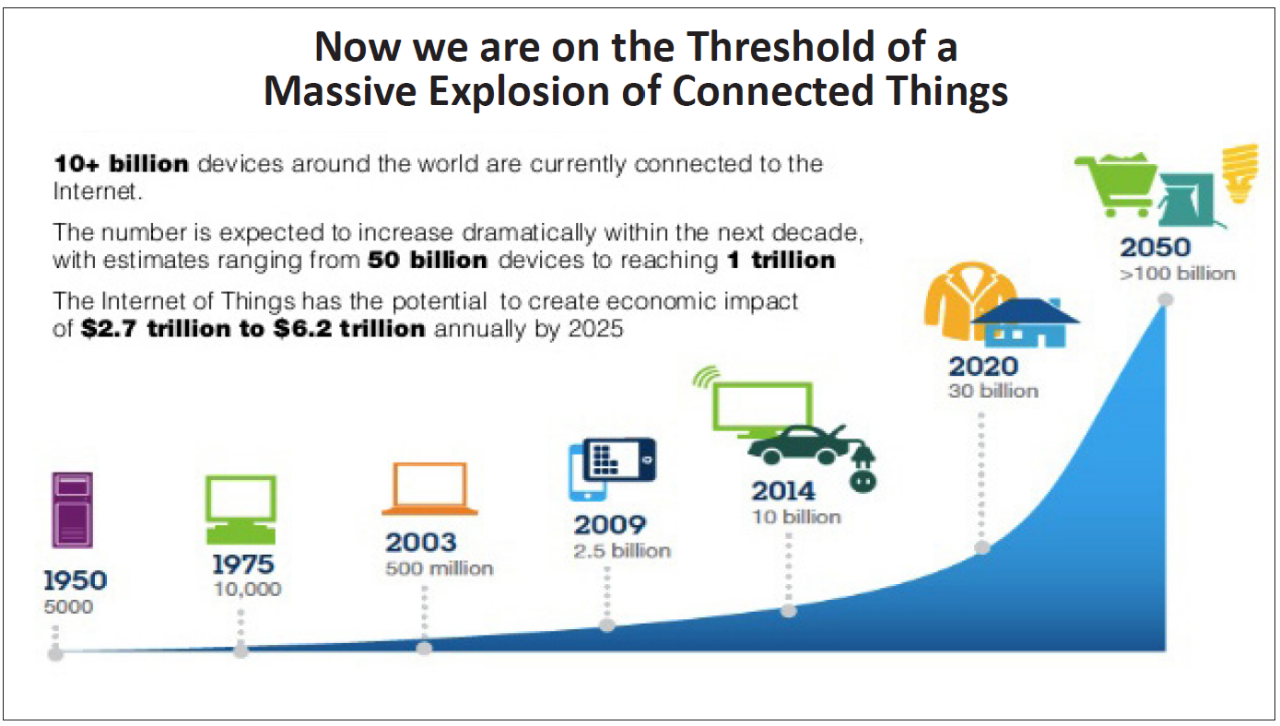 In the information age the most important metric is the rate of increase in the volume of information created, collected, stored, transmitted, and analyzed.  Everything from health care to transportation to entertainment to defense to manufacturing depends on turning data into useful activity.  Today, information is the basis of all power, wealth and security.  Perhaps the most important trend since the mid-20th century has been the falling costs of handling information and, by extension, our ever-expanding wealth of data and data handling technology.

In this segment, we’ll explore this foundational trend and its implications.

At the most fundamental level the amount of data we produce every day is truly mind-boggling. Next year, an estimated 18 billion gigabytes of data will be created each day and that pace will only accelerate with the growth of the Internet of Things (or IoT).

To put this acceleration in perspective, mankind has been recording data for at least 6,000 years.  And yet, 90 percent of all the data in the world was generated over the last two years alone.

Where does all this data come from?

Let’s start with the Internet.  With so much information at our fingertips, we’re adding to the data stockpile every time we turn to our search engines for answers.  Here are a few relevant stats.

-  Roughly 90% of North Americans are on the Internet vs less than 40% of Africans.

-  People conduct more than half of their web searches from mobile phones.

-  While 77% of searches are conducted on Google, we need to remember that there are other search engines contributing to our daily data generation.  Worldwide, there are collectively over 7 billion searches a day.

What about Social Media?  Our current love affair with social media certainly fuels data creation.  According to Domo’s Data Never Sleeps 6.0 report, the volume of transactions that occur every minute on average is as follows:

With 2.4 billion active users Facebook is still the largest social media platform.  That means about one-third the world’s 7.7 billion humans are active on Facebook!  Here are some other intriguing Facebook statistics:

-  There are five new Facebook profiles created every second;

-  More than 300 million photos get uploaded to Facebook every day; and

Even though Facebook is the largest social network, Instagram (which is also owned by Facebook) has shown impressive growth, as well.  Here’s how this photo-sharing platform is adding to our data deluge:

-  There are 600 million Instagrammers;

-   95 million photos and videos are shared on Instagram each day; and

Another big source of data is communications.  We leave a data trail whenever we use our favorite communication methods whether we’re using texting, voice, emails, or video conferencing.  Here are some incredible stats for the volume of communication we send out every minute:

Now that our smartphones are exemplary cameras as well everyone is a photographer and the trillions of photos stored on-line is proof.  Since there are no signs of this slowing down, expect the digital photo numbers to continue to grow.  A couple of years ago the numbers were already huge:

-  There were 4.7 trillion photos stored on-line.

Another rapidly growing source of data is the use of on-line services.  Businesses and other service providers in our new “platform-driven economy” are generating millions of transactions every minute.  Here are a few examples of the volumes generated each minute, 24/7/365:

-  There are 600 new page edits to Wikipedia

Meanwhile the Internet of Things has just begun generating really serious date volumes.  These connected “smart” devices interact with each other and with us while collecting all kinds of data.  This category of technology has exploded from just 2 billion devices in 2006 to a projected 40 billion by 2025.  In 2018 alone, 2.5 billion new devices were connected. And if we count RFID tags and embedded sensors, there might eventually be over 1 trillion.

Armed with these numbers, consider all the ways that you and your company generate data as you go about your day.  Once you are aware of the data generated all around you, you will start to imagine just how that data might be harnessed to make better decisions in your business and life.  And you also begin to see how it might be used against you.  Fortunately, the biggest risk is continuing to simply do business as usual.

First, conventional Internet usage will plateau by the end of the coming decade.

Twenty-six years after the creation of the World Wide Web, nearly 58% of the global population is on-line.  Penetration will rise through most of the 2020s, as mobile access becomes ubiquitous in Africa and Asia.  As we approach saturation, data volumes from queries, social media and entertainment are likely to level off at a low multiple of current U. S. per capita levels.

Second, the primary driver of data beyond 2020, will be the Internet of Things.

By 2025, 41.7 billion IoT devices will be on-line, generating 79.4 zettabytes of data annually.  As mentioned above, RFID tags and embedded sensors will continue to grow toward 1 trillion devices between 2030 and 2050.

For instance, video surveillance data will drive a large share of the IoT data created, while industrial and automotive data will see the fastest data growth rates through 2025.  According to IDC, these data types will have a CAGR of 60%. This is the result of the increasing number of sensors that are capturing data continuously, as well as the introduction of more advanced sensors capturing more (and richer) metrics on machine functions. And,

Fourth, the roll-out of 5G will dramatically increase the performance and reduce the cost of data handling over the course of the coming decade.