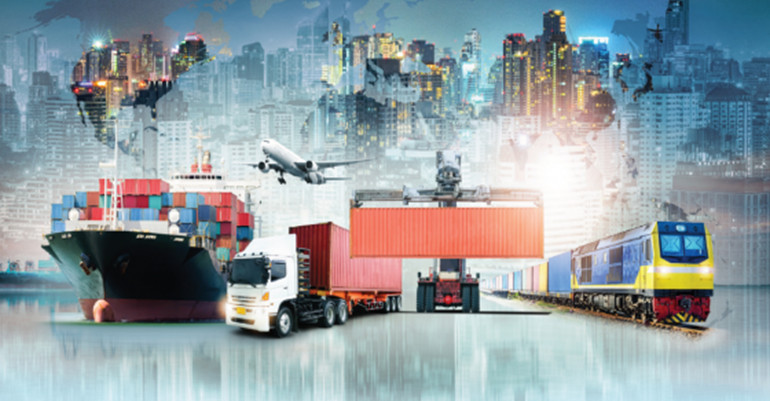 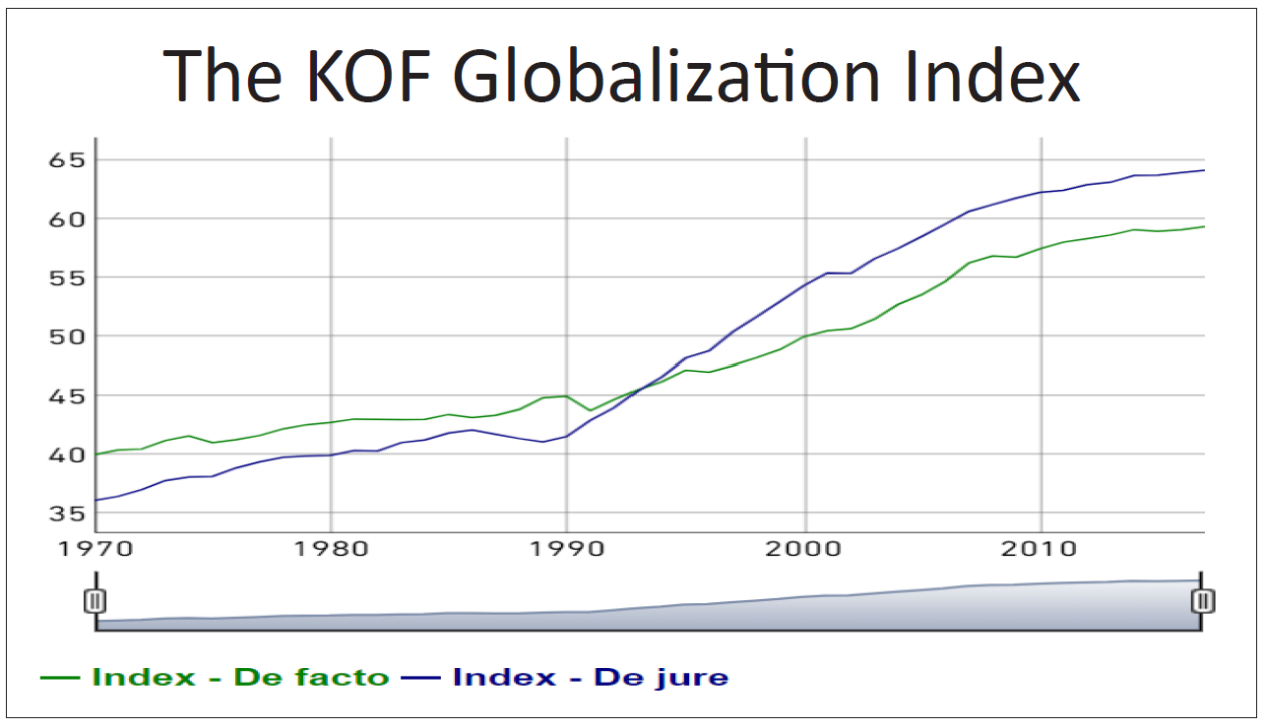 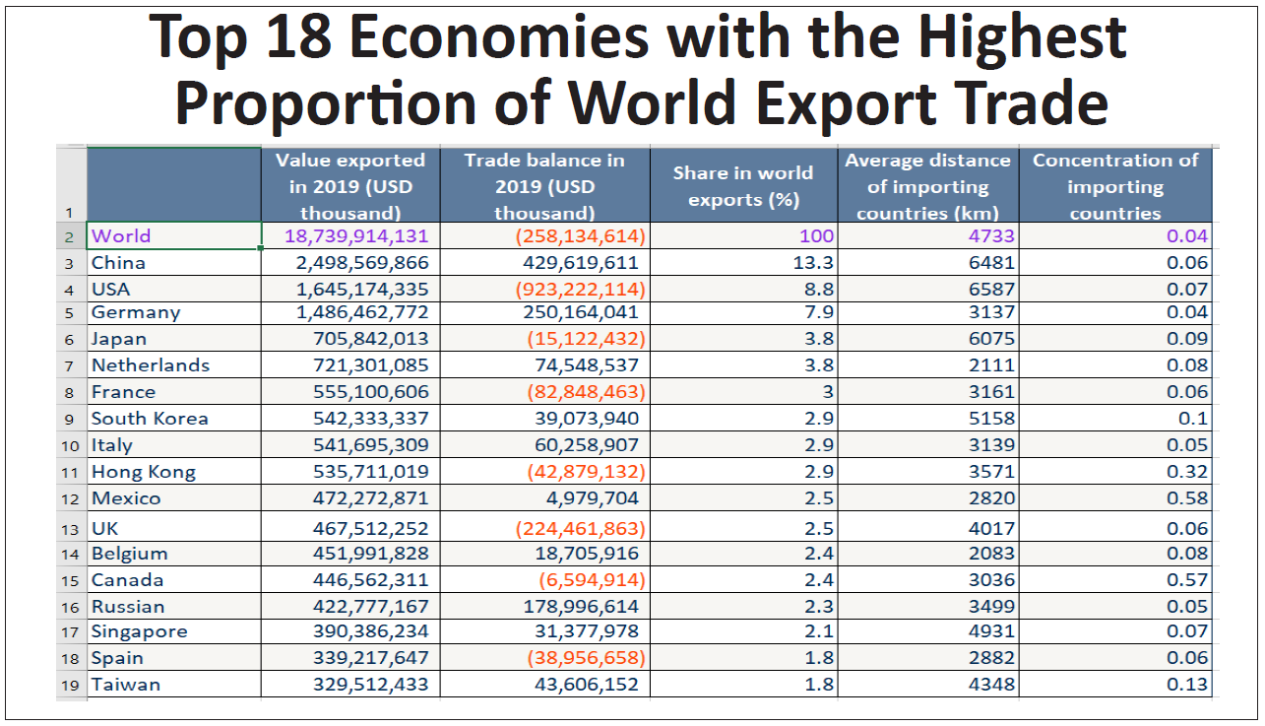 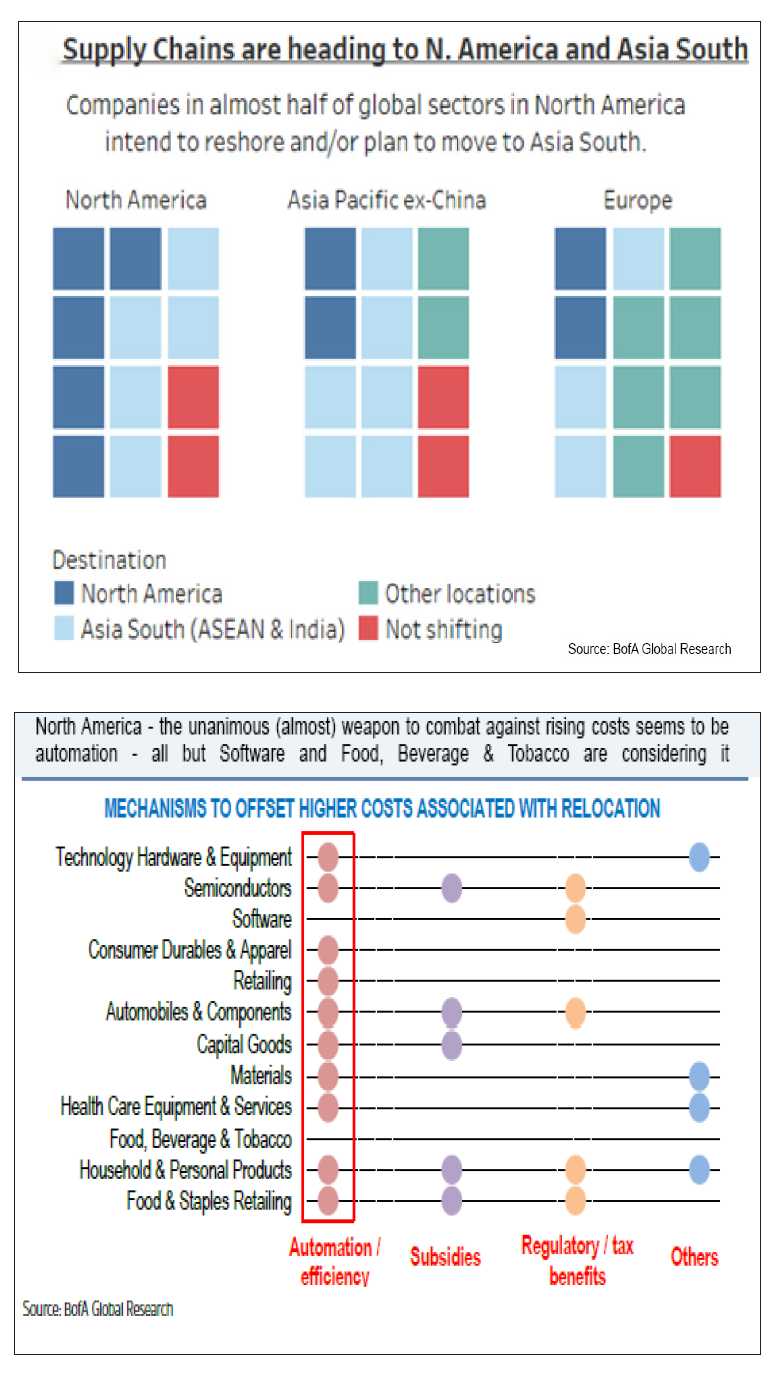 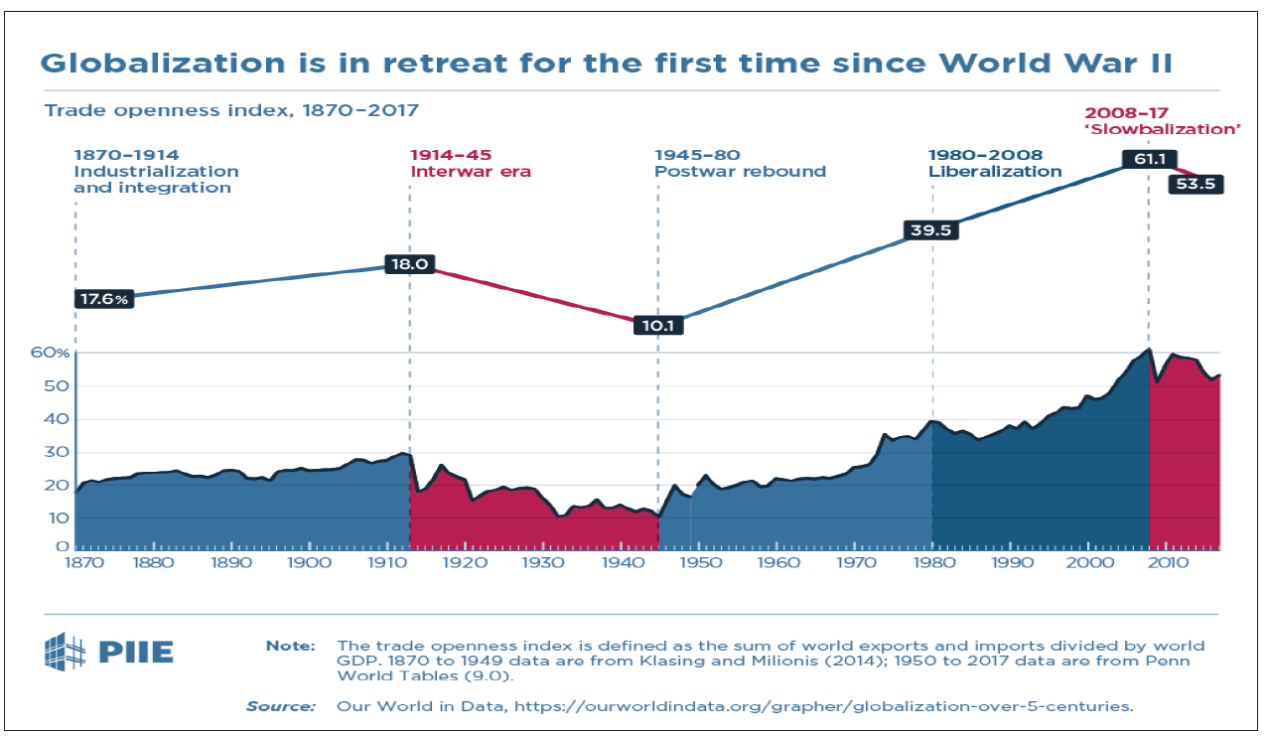 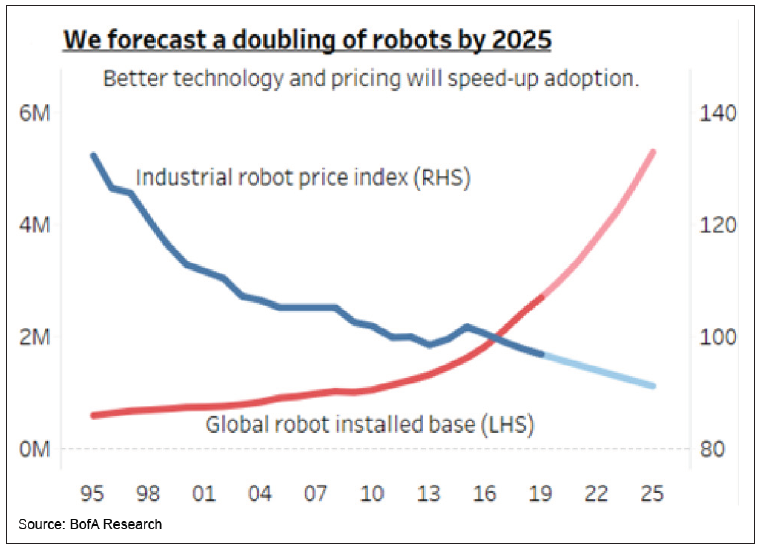 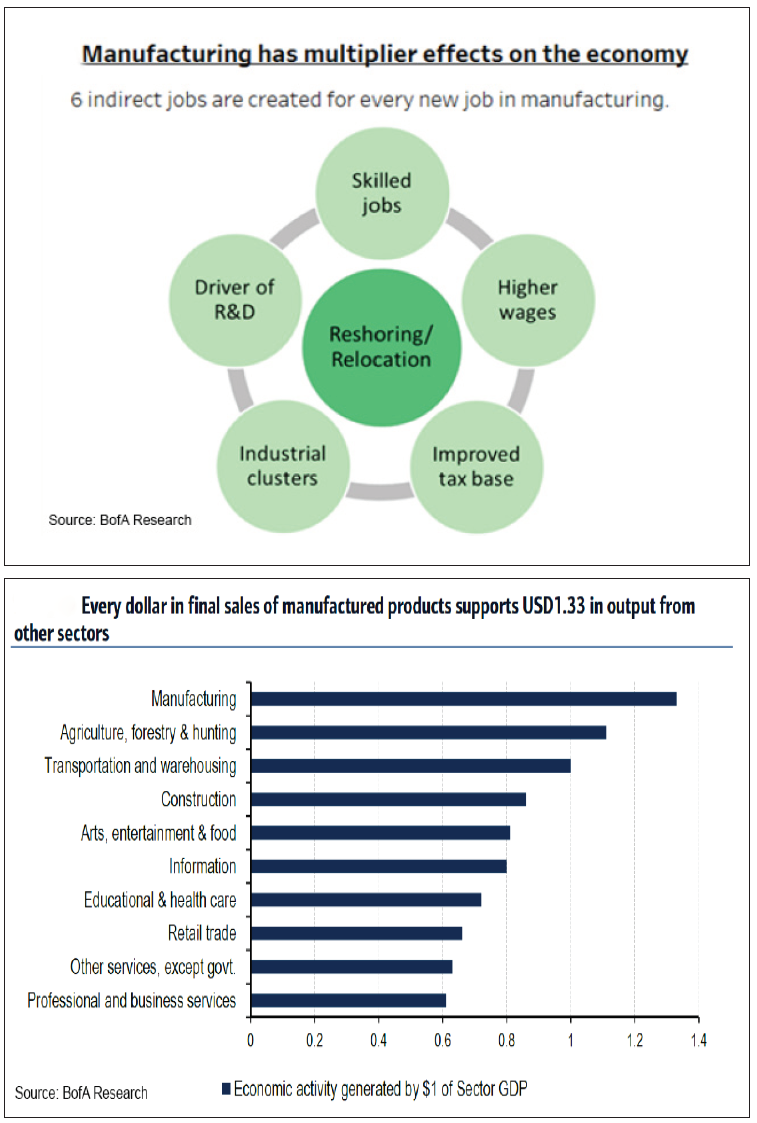 9. Foreign Policy. APRIL 3, 2020.  HENRY FARRELL.  A Most Lonely Union: The EU is a creature of multilateralism. Can it survive in a deglobalized world?
https://foreignpolicy.com/2020/04/03/brexit-european-union-deglobalization/

10. com. 05 May 2020.   Douglas Irwin.   The pandemic adds momentum to the deglobalization trend.
https://voxeu.org/article/pandemic-adds-momentum-deglobalisation-trend

The Era of Deglobalization

Deglobalization is the process of diminishing interdependence and integration among nation-states. It describes periods of history when economic trade and investment between countries declines. Notably, while globalization and deglobalization are antitheses, they do not mirror images. Throughout history, periods of “interdependence have come and gone on a cyclical basis.  However, only the most recent wave of interdependence, beginning around 1990, has involved a majority of the world’s population.

In the past 50 years, especially since China’s entry into the WTO in 2000, the speed of globalization has been unprecedented, and its primary impact has been concentrated largely in a few economies, even while touching most of the world’s people. Specifically, since 1970, there has been a worldwide increase in globalization of about 50%.  And the result has been an unprecedented surge in a trade dominated by China, the United States, Germany, and Japan. The rise of this trading system has been highly dependent on the free flow of capital, human resources, information, and technology, as well as the actual exchange of goods and services.

This age of hyper-connectivity has led to an explosive increase in interdependence across the political, commercial, financial, and social spheres.

Over the 30 years prior to the COVID19 pandemic, this wave of globalization brought accelerated economic growth in both middle-income and high-income economies.  And it contributed to an unprecedented decline in extreme poverty, worldwide.

Notably, as of 2019, the combined trading activity of China, the United States, Germany and Japan accounted for one-third of global exports. This reflects a high dependence on the globalized economy and implies that the economic transformation required by a reversal in globalization, will be major.

However, globalization also brought new risks to the world, including the risk of over-reliance on vulnerable supply chains.  And these risks have been shockingly exacerbated by our efforts to fight against the pandemic.

The recent rise of deglobalization movements around the world highlights what economists call "local negative externalities" resulting from poorly designed network structures on a global scale.  These include:

- increasing income and wealth inequality and

While global dependency on shared networks enables opportunities for cultural and economic growth, it exacerbates the impact when unresolved conflicts and design errors propagate across social and economic systems. That’s because adding interdependencies has a hidden downside: The more connected a system is, the easier it is for errors and unexpected detrimental behaviors to propagate across the system.Interdependencies create new paths for error propagation and may escalate the risks of malfunctions in both frequency and severity. Anomalies do not grow or occur linearly. So, their magnitude may explode given the existence of critical masses and tipping points during networked propagation processes.

As these systemic risks have become clearer, logistics and information flows have begun to change.  And many countries have started reducing reliance on other countries for certain types of products. In fact, the United States and Japan have specifically provided financing to assist their manufacturers in restoring certain production capabilities to their home countries or elsewhere.  And they are typically demanding that companies ensure more than one supply alternative in their procurement processes.

That has already kick-started a new wave of deglobalization.

As explained in a February 2020 report from Bank of America/Merrill Lynch, the world had already started to see a protracted pause in globalization prior to the COVID19 crisis.  What does this mean? The world has entered an unprecedented phase during which supply chains are being brought home, moved closer to consumers, or redirected to strategic allies.

Obviously, that creates myriad opportunities for the governments, workers, businesses, financiers, and consumers in geographies to which supply chains are being redirected as well as having profound implications for automation and transportation companies, worldwide.

Since the 90s, supply chains have steadily evolved in the direction of lower-costs and profit maximization. However, the most recent shifts appear qualitatively different due to four factors.

1. In the BofA study, tariffs and national security were the reasons companies most frequently cited for supply chain changes. And, even if trade negotiations, such as the recently signed “US-China Phase 1 deal,” eventually cause tariffs to be rolled back, concerns about national security are expected to intensify over the foreseeable future.

2. Southeast Asia and India were the planned destinations for about half of the relocated North American and Asian supply chains. This is a function of attractive labor costs in South & Southeast Asia, which helps offset lower labor productivity and sub-optimal infrastructure in those locations.

3. The other half of the relocated North American supply chains are designated to be “re-shored.” This is particularly true for high-tech sectors and industries for which energy is a key input. This intention, if borne out, would represent the first reversal in a multi-decade trend that has “hollowed out” North American manufacturing. Meanwhile, several Asian and European companies cited North America as an intended supply chain destination, primarily as a way to move production closer to the customer base. That, in turn, reduces shipping costs and lead times. And,

4. The BofA analysis revealed that 92% of over 3,000 public companies intended to use more automation in their new locations. This was equally true of North American and Asian companies. However, European companies also focused on regulatory changes, tax benefits, and subsidies, as ways to mitigate the friction associated with shifting their supply chains.

Obviously, shifting supply chains creates opportunities, as well as risks. Developing countries that depended on labor-cost differentials could be worse off unless they innovate, possess a large pool of domestic consumers, or are strategically aligned with developed markets. The apparent destinations for supply chains such as North America, Southeast Asia, and South Asia should benefit from increased capital spending, job creation, and higher wages, as well as manufacturing’s multiplier-effects on the broader economy.

First, prior experience implies that this era of deglobalization will last until the end of the Fifth Techno-Economic Revolution, between 2035 and 2040.

Robotics, AI, bioengineering, and nanotech will enable more nations to cross the “dematerialization frontier” beyond which a nation’s absolute consumption of materials diminishes.  The value will increasingly depend on innovation and customer responsiveness.  Creating, protecting, and licensing innovations will become the most critical core competency of a nation.  So, those countries which flaunt the rule of law must be ostracized from the mainstream in order to protect the countries which play by the rules.

Why?  North America is largely self-sufficient in terms of energy, food, minerals, talent, and capital.  Yet will strive to attract the most talented immigrants and maintain strategic relationships with a network of like-minded producers and consumers.  However, only North America has a critical mass in terms of both supply and demand to thrive in a deglobalized world.  And that’s especially true now that the excessive regulatory regime and militant labor unions that encouraged offshoring in the 90s are in decline.  That means that the “ripple effect” of creating manufacturing jobs will be enormous; for instance, each new direct job in manufacturing creates 6 indirect jobs across the economy, and a dollar of manufacturing sales has a greater impact on GDP than a dollar of sales in any other sector of the economy.   -  Meanwhile, destroying manufacturing jobs has a similar ripple-effect in reverse.  China is especially dependent on the outside world for capital energy and food, while it lacks a mature consumer economy and has, so far, failed to demonstrate the ability to consistently innovate at the level of OECD countries.  So, once decoupled from multi-national supply chains, China’s growth is likely to collapse. And, coupled with its rapidly aging population, its gender imbalance, and the end of rising affluence, it is likely to face enormous social tension, which will force the Chinese Communist Party to turn inward.

Third, many developing countries will experience a rapid rise in affluence as they join the U.S.-led “global mainstream.”

Half or more of the manufacturing capacity exiting China will go to South and Southeast Asia.  The Philippines, Indonesia, Malaysia, Thailand, Vietnam, Bangladesh, India, and maybe even Myanmar, could profit as multi-nationals work to ensure that their supply chains are secure and diversified.  Pakistan, Russia, Iran, and several central Asian republics may be joined by non-Commonwealth countries in Africa to create a countervailing economic block led by China.  However, China’s mercantilist economic doctrine will seriously limit the economic potential of this alliance.  Longer-term, India will be a huge winner as its educated young people fill much of the gap left by the marginalization of China.

Fourth, to compensate for constraints on human capital, North America will focus on automation as will Europe, Taiwan, South Korea, Japan, Australia, and New Zealand.

In February, Bank of America/Merrill Lynch reported that its Factory Automation Indicator was already signaling an upward change prior to the COVID19 crisis.  BofA went on to report, “better computing, along with improvements in optical sensing, machine vision, voice recognition, environmental sensors, motion actuators, and touch haptics is driving improved productivity and opening new possibilities for automation.”  At the time, BofA projected a doubling of the global installed base of industrial robots to 5 million units by 2025.  However, due to the anticipated automation trifecta of rapidly falling robot prices, improved flexibility, and increased productivity, the Trends Editors believe this forecast is far too conservative.

Fifth, aside from manufacturers and industrial automation companies, the biggest beneficiaries of supply chain relocation will be banks with a strong presence in North America, Southeast Asia, and South Asia.

They will benefit from increased opportunities in trade financing, working capital loans, foreign exchange trading, and treasury services as well as middle-market & transaction management services. And,

Sixth, the de facto cold war, described in trend #3, will intensify between a U.S.-led coalition and a China-led coalition.

China and its allies will be marginalized, and therefore play a diminishing role in global affairs.  A key component of this confrontation will be erecting a “technological iron curtain,” which will proactively exclude China from the mainstream scientific and technological communities.

3. April 3, 2020. Kenneth Rapoza.  The Post-Coronavirus World May Be The End Of Globalization.

9. Foreign Policy. APRIL 3, 2020.  HENRY FARRELL.  A Most Lonely Union: The EU is a creature of multilateralism. Can it survive in a deglobalized world?