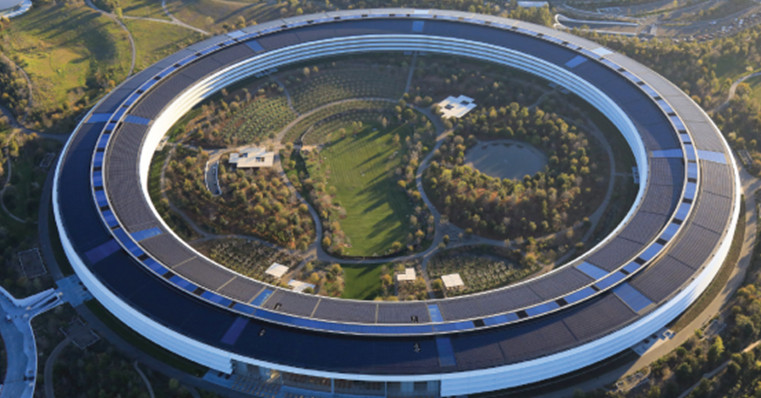 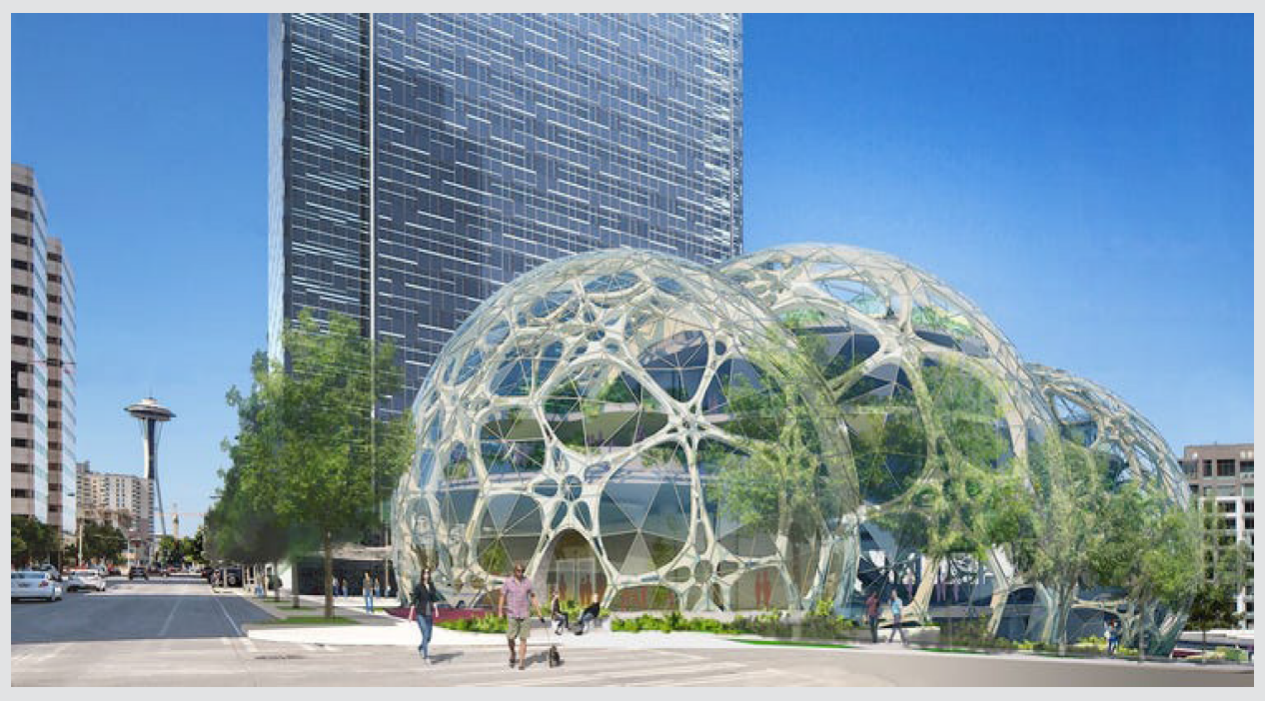 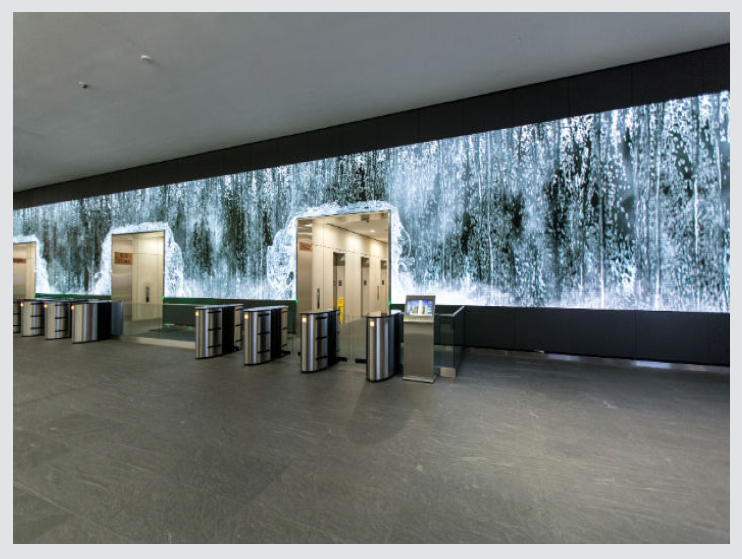 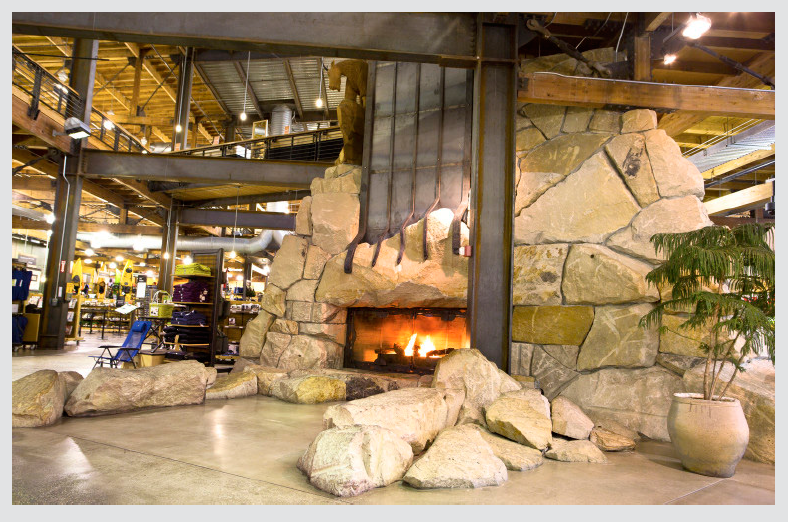 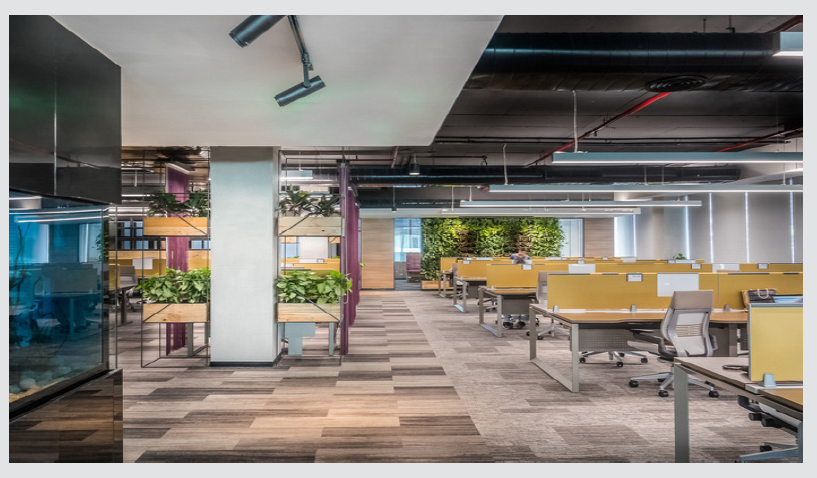 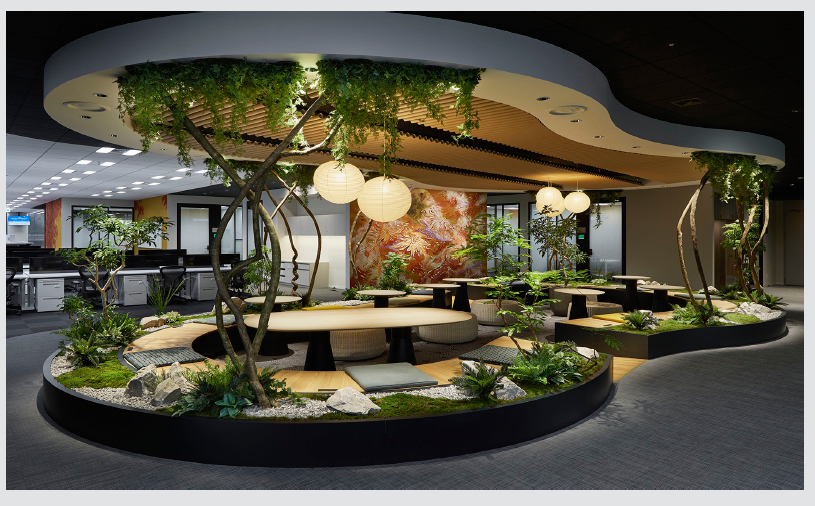 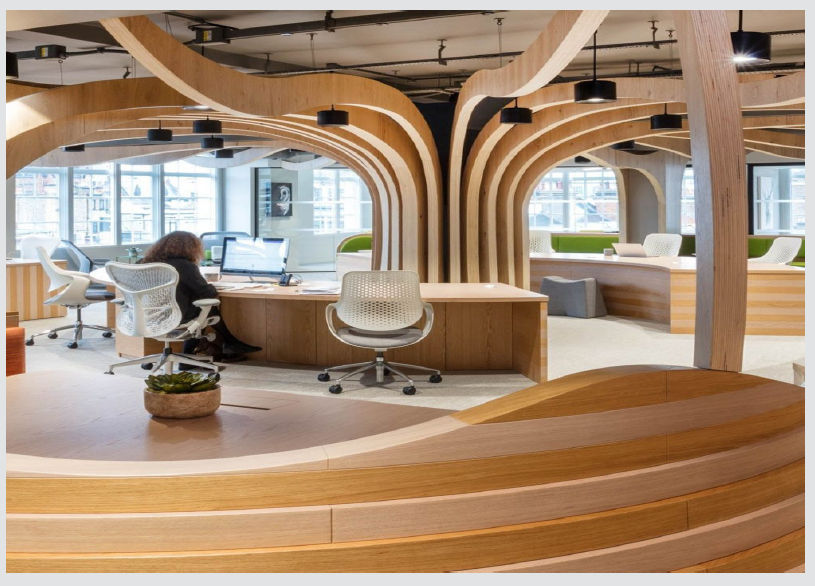 
The Promise of Biophilic Work Design

On average, we spend about 92% of our lives indoors. Yet, the so-called biophilia hypothesis suggests that humans have a strong innate desire to be in contact with natural elements and processes.  Research suggests that when we fulfill that desire, we typically

However, when we don’t, we are more susceptible to stress, depression, and aggressiveness.

Consider the implications which this phenomenon has for work performance.

Many jobs require people to be indoors, whether the work is done remotely or onsite. Recognizing that they can help alleviate the problems associated with nature-free space for onsite workers, employers, have begun to incorporate aspects of nature into employees’ day-to-day activities and workspaces through the so-called “biophilic work design.”  These efforts are wide-ranging.

At one end of the spectrum, companies provide direct immersion using natural elements such as providing employees with an appealing outdoor space where they can conduct meetings or phone calls.   At the other, we have indirect exposure which includes having large windows with sweeping views.

In the case of remote workers changes to physical facilities are not as controllable. However, these workers can be supported in other ways. For instance, managers can encourage people to take walks outdoors to recharge and to bring their laptops outside when weather permits.  Meanwhile, "virtual meeting rooms” with natural backdrops can serve as digital proxies for windows.

While some organizations are embracing biophilic work design for the sake of employee well-being and sustainability, the benefits go even further than that.  According to Professors Anthony C. Klotz of Texas A&M and Mark Bolino of the University of Oklahoma, helping employees interact more frequently and closely with the natural world can boost their energy and thus their work productivity.  And this ultimately impacts the bottom line.

What sorts of changes have these employers already begun to make?

Jobs and workspaces that allow employees to engage with the natural world through direct exposure are able to most thoroughly satisfy employees’ biophilic desires.  A common example of direct exposure is providing workers with spaces such as green rooftop terraces where they can take outdoor breaks. Samsung has taken this concept further than most: In its new 10-story R&D headquarters in San Jose, California, every third floor is an open-air “garden floor,” which ensures that employees are never more than one story away from an outdoor space. Other organizations are encouraging workers to get outdoors through various human resources perks. For instance, every worker at REI is entitled to two “Yay Days” per year; these vacation days are explicitly meant to be spent outside. Similarly, Oakley, the sunglasses maker, gives its employees ski passes, which encourage them to spend time outdoors.

Although not as deeply engaging as being outdoors, bringing natural elements indoors can still give employees direct contact with nature. The Amazon Spheres building in Seattle blurs the line between indoor rainforest and office space.  A less extreme approach is the use of "living walls," which are soil-based walls with plants growing on them, in the design of many workspaces.  For instance, living walls can be found on all nine floors of Etsy’s new headquarters in Brooklyn, New York.

Unfortunately, direct exposure to nature isn’t always feasible.  In those cases, employers can provide indirect exposure not just through windows but also via human-made representations of natural elements or building materials that use those elements.  In the SC Johnson Administration Building in Racine, designed by Wisconsin’s Frank Lloyd Wright, tree-shaped columns in its Great Workroom mimic (in form and function) shade trees found on an open savanna. More conventional examples of indirect contact include wallpaper or murals that depict natural elements or floor coverings made of natural materials.

In some cases, digital tools are being used to simulate or promote interaction with nature.  Upon entering the main offices of Salesforce.com in San Francisco, employees pass by a 108-foot video wall that streams footage of rivers, forests, and cascading water in high definition. Similarly, digital air monitors in the Manhattan offices of the architectural firm Cookfox direct fresh air into workspaces when high levels of carbon dioxide or pollutants are detected. And recorded nature sounds are increasingly being played in open-office settings.

Wherever they fall along the direct-to-indirect continuum, companies typically state that they are embracing biophilic design as a way to increase employee well-being and promote sustainability.  That jibes with existing research on the benefits of providing access to green spaces at work.

For example, when Clif Bar opened its Idaho bakery, which was designed using biophilic principles, CEO Kevin Cleary said, “We wanted it to be a healthy, welcoming place for people to work — a workplace that sustains our people, the community, and the planet.”

When asked about the most important element of Apple’s new headquarters, lead designer Norman Foster focused on the “strong connection with nature and the landscape surrounding the building,” adding that when employees can “breathe fresh air and see the outdoors and the sky, you’re more productive, more alert, and better able to respond to crises.”

Field studies have only begun to empirically demonstrate that biophilic design has improved employee performance in these ways. But it’s not a stretch to expect such outcomes, given the findings of initial studies linking a lack of exposure to nature at work to adverse consequences such as job dissatisfaction and burnout, which are robust predictors of poor performance and counterproductive behavior. And in a digital world, contact with nature may play a particularly important role in counterbalancing the effects of hyperconnectivity, multistreaming, remote work, agile methods, and other job characteristics that can pull employees’ bodies and minds deeper into the realm of the artificial.

Indeed, the gains from increasing employees’ exposure to nature may be even richer than organizations currently realize. Interactions with nature have the potential to boost employees’ energy reserves in four ways: cognitively, emotionally, prosocially, and physically. However, to reap these benefits, it is not enough to simply place employees in contact with nature; leaders must do it thoughtfully and avoid countering the potential gains with other choices they make about job and workspace design.

Consider this example: Whereas natural features in offices are often stationary, the offices of web hosting company OVH in Quebec City use large but movable planters to allow employees to customize their proximity to nature while at work.   Organizations that engage employees in the design of their workplaces can tailor contact with nature to individuals’ distinctive desires.  At REI’s new headquarters in Bellevue, Washington, an “everything outdoors” infrastructure was designed and built, complete with hallways open to the outside and roll-up doors in conference rooms to allow year-round open-air meetings. The final 20% of the design, which involves space configuration details, was left unfinished.  This way, REI’s employees can not only customize their own workspaces but also, as a group, customize common areas, such as the rooftop green space, to align with collective biophilic desires.

For centuries, philosophers have extolled the virtues of connecting with the natural world—but organizational leaders have just begun to embrace this wisdom in recent years. To make smart investments in updating their workspaces, HR practices, and cultural norms, leaders should understand that the effects of biophilic work design can depend on a number of factors: such as whether the exposure to nature is direct or indirect, the types of natural elements incorporated, the psychological climate, the organizational culture of the work setting, and the ability to tailor workspaces to suit individual differences in biophilic desires. When these factors are thoughtfully considered, the benefits can be maximized.

First, companies that embrace enhanced contact with nature will benefit from employees’ increased ability to concentrate on work tasks.

That’s partly because it has a recharging effect; it restores people’s willpower, much like breaks for exercise or meditation during the workday do.  But there’s another reason as well: Contact with nature that gently holds one’s attention can enhance cognitive functioning in a way that is not taxing.  When taking a break on a rooftop terrace, employees can enjoy the mentally energizing effects of fresh air and the sun without having to focus their attention on those elements. — However, not all forms of exposure to nature seem to have equivalent effects on cognitive energy.  Anthony Klotz and Mark Bolino suggest that because we tend to tune out static things after repeated or ongoing exposure, natural elements are more apt to hold people’s attention if they are dynamic rather than static over time.  So, in settings such as SAP’s offices in Gurgaon, India, which include static biophilic features like reclaimed-wood floors, there is a need for dynamic natural elements like large aquariums and plant walls. Such dynamic features can be expected to contribute more to employees’ mental energy than static elements like reclaimed wood.

Second, companies that successfully encourage enhanced contact with nature away from the workplace will emotionally energize employees leading to better performance.

Enhanced contact with nature away from the workplace is like taking a psychological vacation and it allows people to gain at least some of the benefits associated with real vacations, such as improved mood and reduced emotional exhaustion. Some companies have gone to great lengths to give workers nature-based "psychological escapes from the office" even on-site. Indeed’s new Tokyo offices include biophilic oasis spaces, small areas for both relaxation and work that are surrounded by trees, moss, and rocks. Importantly though, if other work conditions are deficient, that can thwart employees’ ability to “getaway.” For example, if an employee has an abusive manager or is given demeaning job tasks, no amount of biophilic work design will allow him or her to emotionally escape that reality.

Third, introducing biophilic work elements will boost employees’ desire to help others and build positive relationships at work and elsewhere.

Given the connectedness among elements in the natural world — the air we all breathe, the sun we all see, and so on — exposure to nature may prompt feelings of oneness with the world and with others.  Such feelings, in turn, can increase generosity and cooperation.  Indeed, to the extent that people feel they are part of the natural world, they are more likely to be open to others’ perspectives.  Biophilic work elements can be designed with those benefits in mind.  For instance, at the new headquarters of Morgan Sindall Group in London, the central design-feature is a massive “engineered tree” whose branches reach out across the entire building. Unfortunately, the prosocial impact of such work design elements may be undermined by a barrage of unnatural and unpleasant intrusions, such as the constant pinging of new emails.  After all, such intrusions tend to focus our attention on the “micro” aspects of work, rather than the broader world.  And,

Fourth, being outdoors will boosts levels of hormones associated with physiological health and vitality, but the benefits will vary among individuals.

Research shows that the physically energizing effects of nature differ based on the degree to which individuals yearn to connect with the natural world.  Although the biophilia hypothesis predicts that all individuals have an innate desire to connect with nature, the strength of this desire differs from person to person.  What’s more, not all employees will feel equally vitalized by a given form of contact with nature at work.  So, nature-based work design should strive for compatibility between employees’ biophilic desires and the physical work environment.