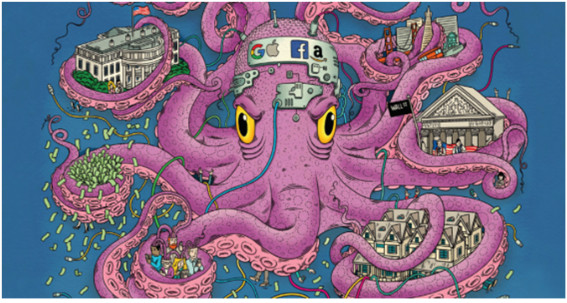 As we observed in the September 2017 Trends issue, “During the Obama years, the largest Silicon Valley firms carefully courted the people in the White House, even as their down-ballot allies were decimated.  Today, the “Internet Robber Barons” have dramatically fewer powerful friends left in Washington or most of the state capitals.  Their best friends in Congress are in the minority.  Friendly regulators are being rapidly replaced by those who have little reason to give them the “benefit of the doubt.”  And, with many vacancies to be filled, the judiciary is taking on a less friendly demeanor as each day passes.”  Since then, these trends have continued to unfold.

Most recently, on June 17, four Republican senators introduced a bill aimed at limiting legal protections of Big Tech platforms if they are found to “selectively” suppress certain content.  Missouri Senator Josh Hawley said his measure would “give users the right to sue if the big platforms enforce their terms unfairly or unequally.”

How?  Section 230 of the Communications Decency Act (or CDA) protects websites from being liable for the speech of their users.  The Hawley bill would strip the liability protection from platforms that “restrict access to or availability of material to users by employing an algorithm that selectively enforces” its policies.

Hawley specifically charged that “Big Tech companies like Twitter, Google, and Facebook have used their power to silence political speech from conservatives without any recourse for users.  Congress should act to ensure [these] bad actors are not given a free pass to censor and silence their opponents.”

The bill follows up on President Trump’s May 28 Executive Order pointing the way toward future action that the federal government might take to rein in the power of social media platforms, such as Twitter and Facebook.

As Trump said in the Oval Office, the Silicon Valley companies have “unchecked power to censor, restrict, edit, shape, hide, or alter virtually any form of communication between private citizens or large public audiences.”  He added, “There’s no precedent in American history for so small a number of corporations to control so large a sphere of interaction.”

Reacting to the ongoing riot happening in Minneapolis, Trump tweeted: “I can’t stand back & watch this happen to a great American City, Minneapolis. A total lack of leadership. Either the very weak Radical Left Mayor, Jacob Frey, gets his act together and brings the City under control, or I will send in the National Guard & get the job done right….”

And then, in a second tweet, Trump added: “…These THUGS are dishonoring the memory of George Floyd, and I won’t let that happen. I just spoke to Governor Tim Walz and told him that the Military is with him all the way.  Any difficulty and we will assume control but, when the looting starts, the shooting starts. Thank you!”

Whereupon Twitter took it upon itself to hide the second tweet and insert a note that said: “This Tweet violated the Twitter Rules about glorifying violence.”  That was an unprecedented confrontation undertaken by a Silicon Valley company that didn’t even exist 15 years ago, accusing the President of the United States of “glorifying violence” and censoring his words.

Then, on June 1, some Facebook employees staged a “virtual walkout” to protest the company’s editorial policies, which they judge to be too easy on Trump.  In response, on June 5, Mark Zuckerberg posted an item on his own Facebook page initially indicating that he would accede to this pressure.

Section 230 allows for platforms to moderate content and remove materials deemed to be promoting hate or violence.  But without the existing protections, online forums like Facebook, Twitter, and Reddit, as well as media outlets, could be sued for anything posted by a commenter that might cross the line.  In addition to an increase in legal costs for these platforms, ISPs would be forced to censor content, which means users would have different kinds of access to certain websites, depending on their ISP.

The legislation and the executive order mentioned previously arise from claims by Trump and his allies that social media platforms are biased.  Their plan is to use revisions to Section 230 as a way of reining in social media firms and shut the door to a range of harmful online content.  Meanwhile, some activists and legal specialists argue that Section 230 is a cornerstone of the open internet because it allows services to host content from third parties without fear of legal action.

Separately, the Trump administration is working to drive reforms of Section 230, so as to “provide stronger incentives for online platforms to address illicit material on their services while continuing to foster innovation and free speech.”

So, what does the most recent escalation of conflict mean for Big Tech and society more broadly?  Trump’s Executive Order sets policy within the executive branch, which includes the Justice Department, which is now presidentially instructed to set up a "platform working group” including state attorneys general.  And state AGs can be potent, since they, can file their own lawsuits against Big Tech, although all of these legal wheels tend to grind slowly.

In the meantime, other administration policies will be submitted to independent regulatory bodies, such as the Federal Communications Commission and the Federal Trade Commission; these agencies will have to make their own decisions. Yet as a revealing aside, we should note that Ajit Pai, chairman of the FCC, has been quick to criticize Twitter’s “dopey censorship,” and another Trump appointee to the commission, Brendan Carr, has been a regular critic of social media bias.

So, while Trump’s executive order is an important action, it won’t end censorship overnight.   It simply sends a message to Big Tech companies in Silicon Valley that they can expect further action from both federal and state levels.  How do we know? Because similar action has come before, in an analogous situation in earlier U.S history.

As journalist James Pinkerton observes, “we can learn a lot from a strong precedent for government authorities taking on a super-powerful industry.” That is, in the mid-to-late 19th century, governments challenged the tech titans of that era, namely, the railroads.  So, if we wish to get an inkling of what’s likely to happen to Big Tech in the 21st century, we can look back at the history of Big Railroads in the 19th century.

Indeed, from rails’ first beginnings in Massachusetts in 1826 to the laying of almost 9,000 miles of track in 1851, to the completion of more than 158,000 miles of track by 1890.  The growth of the railroads in the 19th century mimicked Moore’s Law in its rapidity.

In fact, every superlative about the relative clout of Big Tech today could be matched by that of Big Railroads then; the railroad tycoons were frequently dubbed “Robber Barons,” and their companies were often collectively known as “The Octopus.”

Not surprisingly, the public was soon demanding that the railroads - economically beneficial and transformative that they were - must be made to better serve the public interest. Yet regulation by the federal government didn’t come until 1887 when Congress established the Interstate Commerce Commission (or ICC), aimed at economic regulation of the rails - especially of the rates charged to farmers who needed to get their crops to market. Still, the ICC didn’t have real teeth until 1906, when President Theodore Roosevelt, engineered passage of the Hepburn Rate Act.  Then finally, the railroads were deemed to be a common carrier to be regulated, at least somewhat in the mode of a utility.

Thus, we can step back and see that the process of properly regulating the railroads was a multi-decade effort, involving leaders in every state and in both political parties.

So now, if we shift our focus from Big Railroads to Big Tech, we can consider the ways in which railroads and digital platforms are similar.  That similarity includes what economists now call the “network effect,” also known in tech circles as “Metcalfe’s Law.”

The lesson of the network effect is that the possessor of a network reaps a disproportionate advantage, or increasing returns, based on the number of “nodes” (i.e. users, customers, or suppliers) on the network. There’s nothing wrong with the network effect; it’s simply an economic phenomenon, the results of which are sometimes called “positive network externalities.”

Or as the related Metcalfe’s Law puts it, "A network’s value is the square of the number of nodes in the network." For example, if a network has 10 nodes, its value is 100 (10 x 10). But if network has 100 nodes, its value 10,000 (100 x 100). So, we can see: a ten-fold increase in nodes equals a hundred-fold increase in network value.  Thus, the value of a network doesn’t just increase arithmetically as it grows in size, it ramps up exponentially.

They were and are both networks, one is physical, the other being virtual.  Moreover, they are both common carriers.

This combination of being a powerful network, which is obvious already, as well having common-carrier status, which is becoming obvious, means that Big Tech, today, is likely to face the same regulatory destiny as Big Railroads, back then.

First, regulatory action against the big tech firms is inevitable regardless of the outcome of the 2020 elections.

Republicans' need to constrain hostile activity by employees of Facebook, Google, and Twitter might have accelerated the movement to regulate the platforms in the 21st century, but it is as inevitable as regulation of railroads in the 19th century was inevitable.  In fact, the Democrats, are already on board. Back in January, Joe Biden declared that he was in favor of new regulation on the tech companies; in the words of Politico, Trump, and Biden “have come to the same conclusion for starkly different reasons.”  And that’s how enduring change happens, with bipartisanship.  On the other hand, policies with the support of only one party are often undone with the next changing of partisan power.

Why not? Because the value of a network is created by Metcalfean network effects. Therefore, breaking a network into little pieces hurts customers; therefore, it’s far better to keep the network, and its exponential value together, while applying the regulation to make it fair and to capture some of that value for the public.  To do so, the most obvious answer is to create a "Federal Platform Commission," analogous to the Federal Trade Commission, established in 1914, or the Federal Communications Commission, created in 1934.  A properly run Federal Platform Commission would not permit Twitter to single out the President of the United States for censorship while okaying the tweets of "myriad jackasses and lowlifes."  A private company has a great deal of discretion in its business choices, but a common carrier, by legal design, has very little discretion.  And,

Third, Google, Apple, Amazon, and other tech giants which don’t create consumer value primarily through network effects, are still likely to be dismantled much as we saw with Standard Oil and the other 19th Century “trusts.”

On June 25, the U.S. Department of Justice met with state Attorneys General to discuss an antitrust probe of Google.  The federal government and attorneys general which are representing 48 states, Puerto Rico and Washington, D.C have now opened a range of investigations into allegations that Google has broken antitrust laws. The federal probe is focusing heavily on search bias, advertising, and Google’s Android mobile operating system.   As of this writing, they are drawing up subpoenas known as “civil investigative demands” to support the investigations.  Texas Attorney General Ken Paxton is leading the probe, which initially focused mainly on Google’s advertising business. But at a recent meeting, Paxton expressed his support for expanding the purview of the investigation to include Google search and the company’s Android mobile operating system.  Other states will be carrying out investigations of search and Android separately.