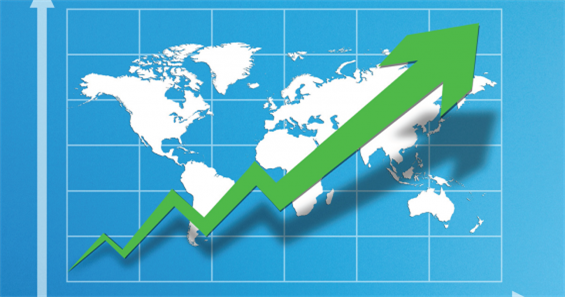 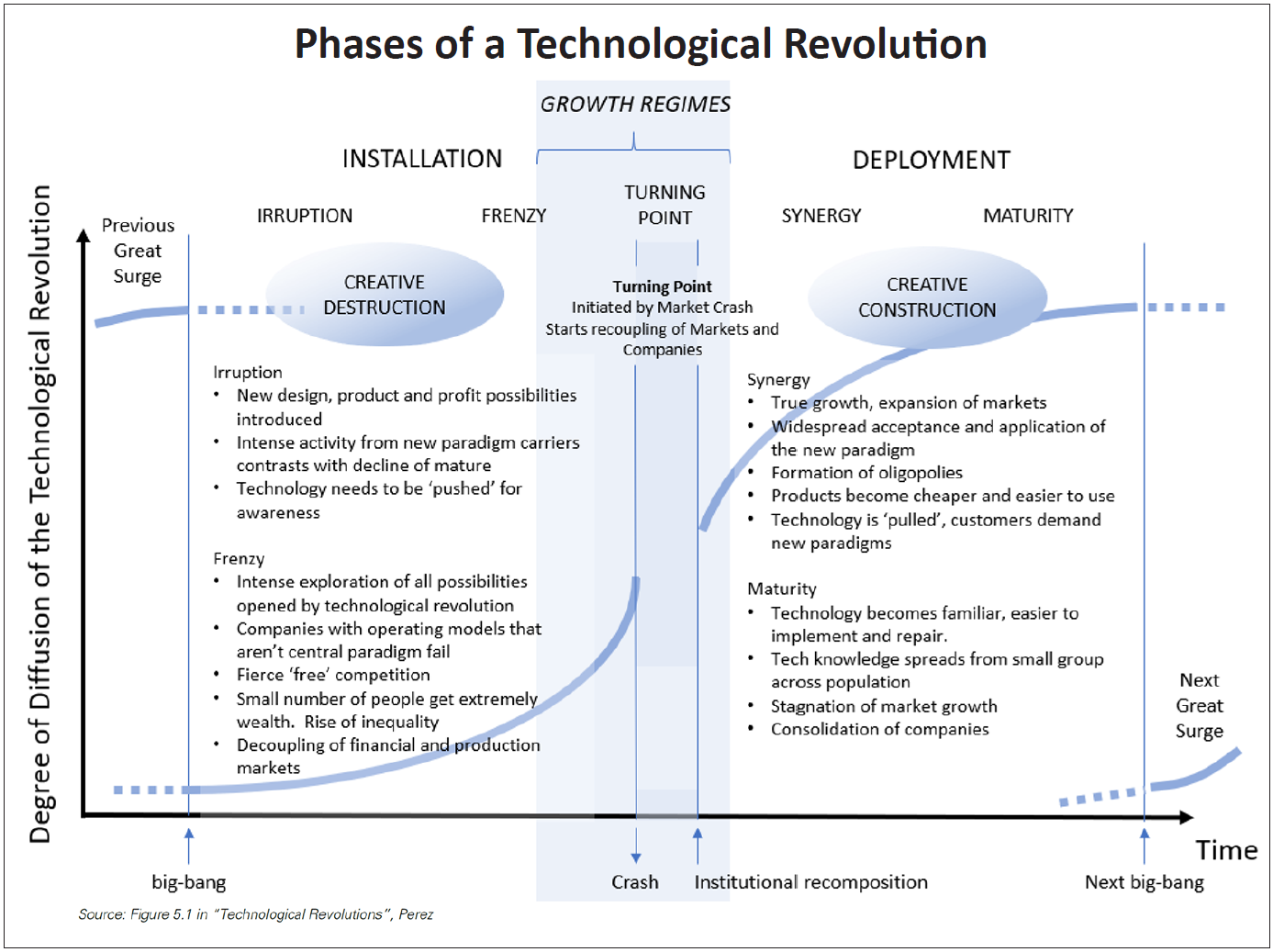 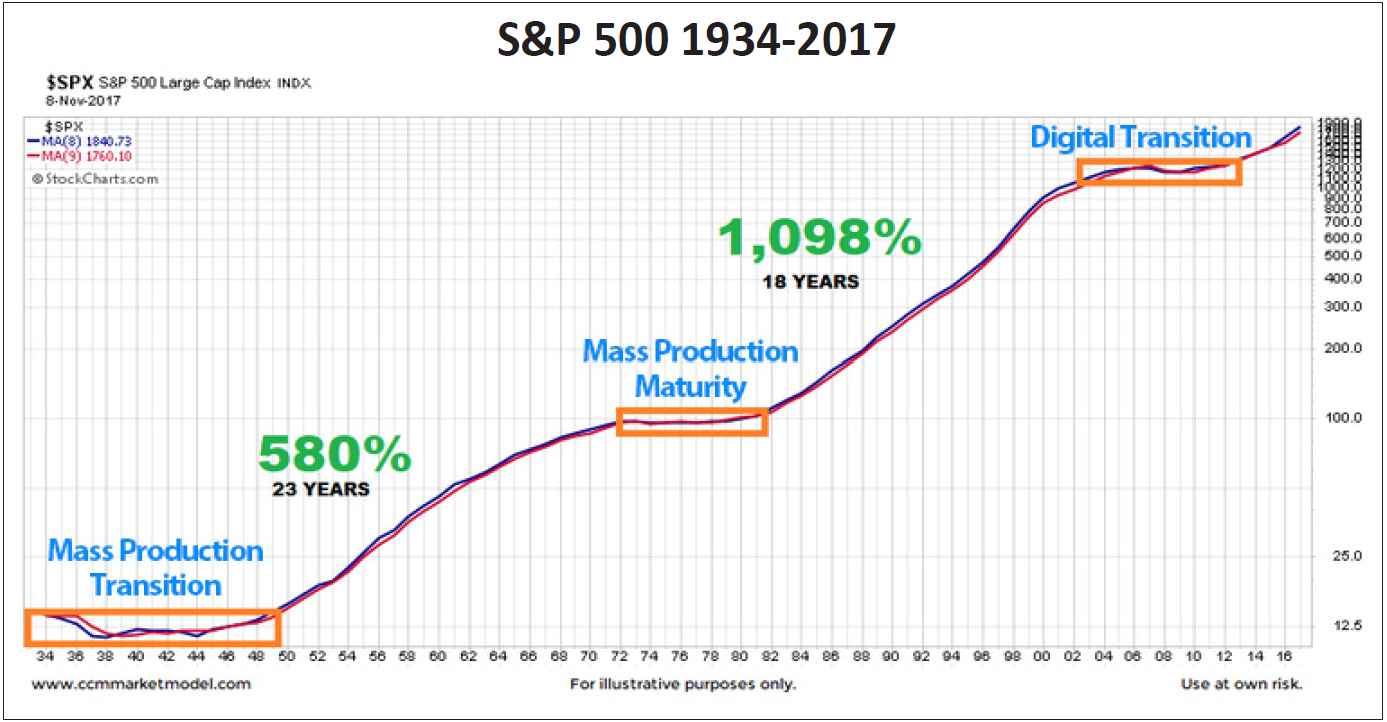 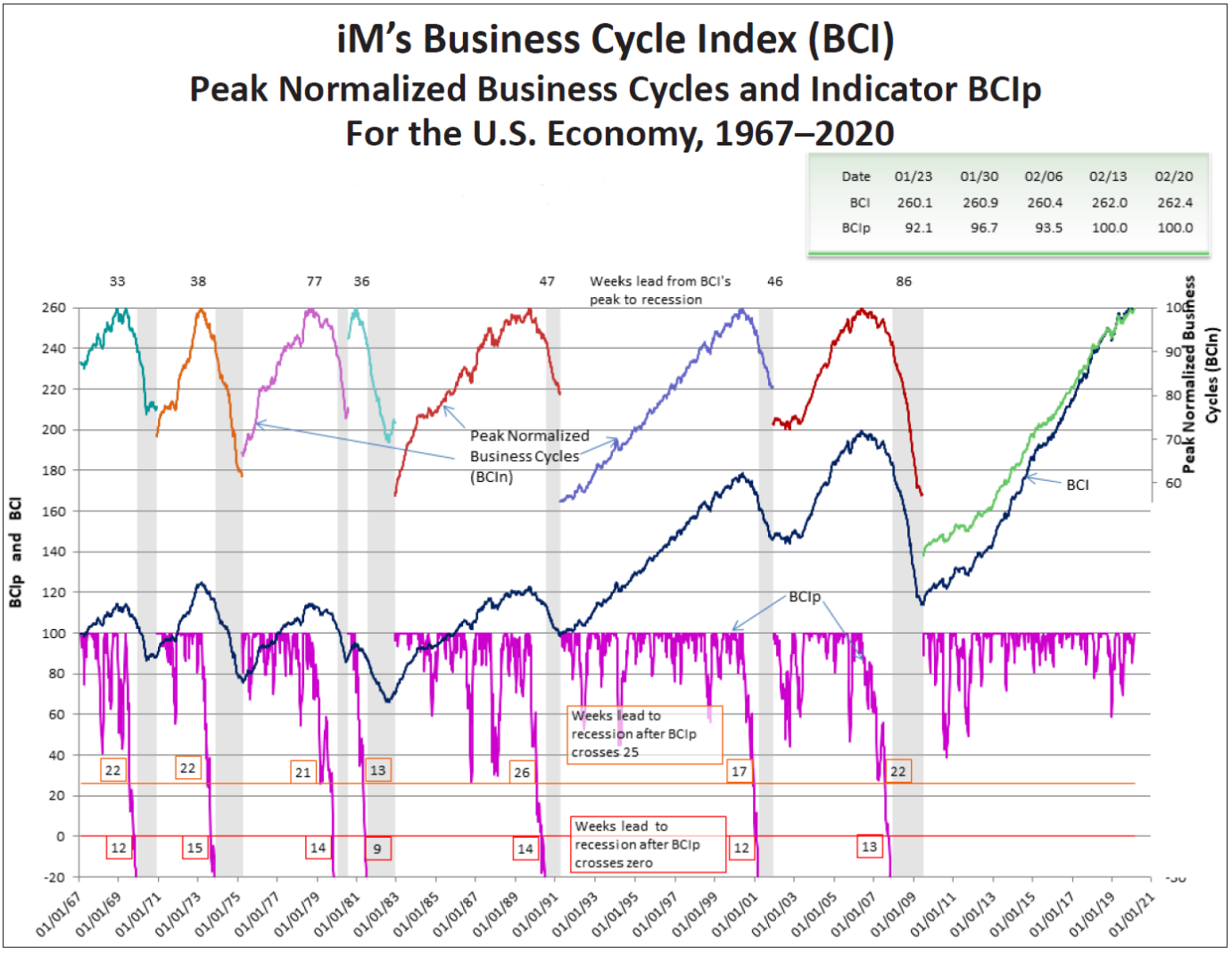 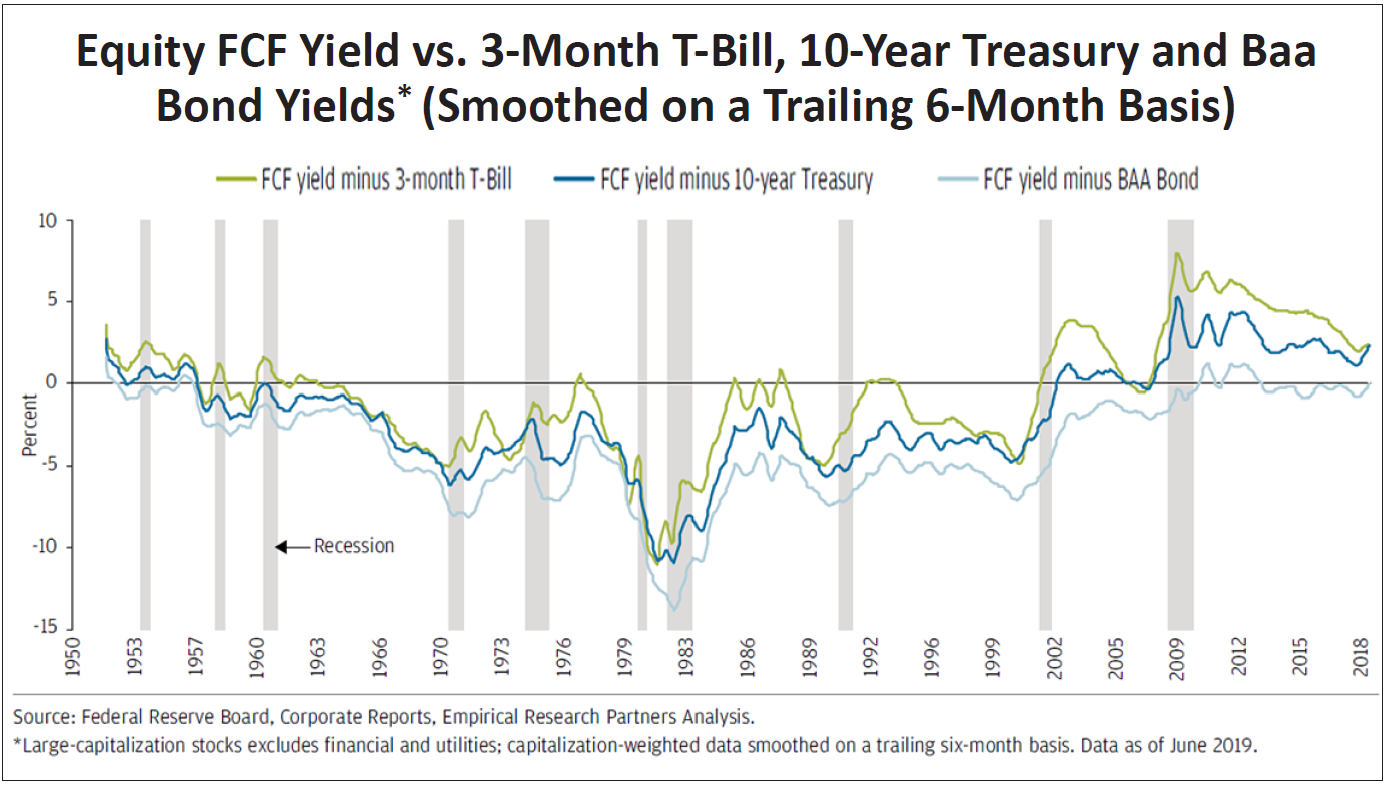 Riding the Secular Bull Into the 2030s

On December 15, 2017, the Trends editors wrote, “Stocks are currently involved in a secular bull market.  It began in 2013 and it is likely to run for at least another 15 years.  It’s a natural by-product of the Deployment Phase of the Digital Techno-Economic Revolution.  It began in the latter stages of the [Revolution’s] Transitional period and will continue until this revolution plateaus” between 2032 and 2035.

In spite of the growing evidence for this scenario, we still hear protests from skeptics, expecting us to return to slow growth, a “new normal” economy and a lackluster stock market.  They constantly seek new reasons for this boom to come crashing down.

Meanwhile, those who enthusiastically embrace the Secular Boom and the related Digital Revolution need to know where this bull market stands, where its headed in the short-to-medium term, and how they can take advantage of it.

In early 2020, we’re nearly seven years into the secular bull with an estimated 13-to-15 years left to run.  But that doesn’t mean everything is headed straight up.  Just as the 1991 recession briefly interrupted the 1982 to 2000 secular bull, don’t be surprised when another recession temporarily interrupts this secular bull.  Similarly, the secular bull market from 1949 to 1966 occurred despite three recessions associated with the Korean War, the Cuban Missile Crisis and the assassination of President Kennedy.  For this era, investors need to trust the long-term secular trend, while always looking a year or so out to anticipate cyclical risks.

Rather than spend a lot of time on the broader issues related to the pace of the Fifth Techno-Economic Revolution, this segment focuses on the market-related indicators that demonstrate that this is a genuine secular bull and that it’s nowhere near its end.  More importantly, we consider some of the cyclical risk factors that might impact markets in 2020 and early 2021.

One of the subtle differences between cyclical and secular bull markets is that secular bulls exhibit consistent strength, grounded in an emerging technological paradigm; cyclical bulls simply respond to the medium-term business cycle.  Those who subscribe to our sister publication, Business Briefings know that we’ve persistently forecast the inexorable rise of the market that’s occurred since March 2009.  Over that period, the market has continued to send its upbeat message, week-after-week, for nearly 11 years, in spite of energy price wars, a trade war with China and financial problems in places as diverse as Greece and Venezuela.

From 2009 to 2013, this uptrend in stocks appeared to be another cyclical recovery within the secular bear market that began in 2000.  In fact, most investors expected just another new top in 2013, which many believed was simply a cyclical bull market coming to an end.  However, the Trends editors and a few others declared this to be the start of a new “secular bull market.”  We were especially confident, because this break out confirmed what we were looking for based on the theory of Techno-Economic Revolutions as described in our book, Ride the Wave.

We knew that a new secular market always accompanies the beginning of a new phase in the techno-economic cycle; for instance, a secular bear market emerged in 2000 with the beginning of the Transition Phase.  By 2013, we knew that the pump was primed for launching the Deployment Phase of the Digital Revolution, but we had to wait for market signals before we could acknowledge that the financial markets had begun to anticipate the new era.  In 2013, that signal arrived in the form of a breakout above the long-established range as well as a successful retest of the breakout which confirmed that the new secular trend was in place.

Based on previous secular bull markets, once the break-out and retest occurred, we knew that the subsequent rise would last for a long time; probably 18 to 20 years.

Previously, we’ve used a graphic created by money manager Chris Ciovacco to illustrate this point; it’s shown in the printable Trends issue this month.  It illustrates this market pattern repeating itself three times in the context of the S&P 500 over the years 1929 to 2013.

Despite the 200% rise in the S&P 500 since February 2013, a large share of investors and investment managers remain skeptical.  Why?  One reason is that the last cyclical bear market, which occurred during the emotional and scary financial crisis of 2008 to 2009, permanently damaged their psychology.  Consequently, many of them remain scared of traditional long-only equity risk.  This is confirmed by the fact that actual public equity allocations for individual investors, pensions, endowments, foundations, and hedge funds remain more focused on limiting the downside risk of equity holdings than on exploiting potential opportunities.

The financial media is full of commentary speaking of an imminent bear market, the collapse of a sector, or some extreme speculation that will end badly.  Bullish analysts who arent advocating defensive portfolio income strategies are treated with suspicion, whereas bearish pundits, many of whom have missed the entire bull market, are considered gurus.

Fortunately, the prevalence of fear, uncertainty, and doubt, which we refer to as the “FUD Factor,” is our best insurance against disaster.  FUD creates the proverbial “wall of worry” which keeps a bull market from becoming a bubble.  A bubble occurs when everyone concludes that owning a specific asset class (like dot-com stocks in 1999, tulip bulbs in the 1600s, houses in 2007, or Japanese real estate in 1989) is a sure-fire road to riches.  As soon as FUD disappears, the cyclical trend and perhaps even the secular trend needs to be carefully reexamined.

As futurists who invest our own money, the Trends editors expect the secular bull market in equities associated with the Digital Techno-Economic Revolution to continue until the mid-2030s, with occasional cyclical interruptions.  We carefully avoid giving financial advice and we are quick to warn that unforeseeable factors like war and natural disasters can disrupt even the strongest trends.  However, it’s clear that the opportunity remains strongly tilted to the upside.

First, investors’ recent allocation of funds away from equities is consistent with a 5-year cumulative return of over 90% on the S&P 500 through 2024.

In late December 2019, U.S. cash outflows from equity mutual funds and ETFs to fixed income assets (like bonds) reached a historical high.  The specifics are shown in this month’s printable issue of Trends.  On the four most recent occasions when this happened, it presaged extraordinarily high stock market returns.  Why?  When hundreds of billions of dollars are ultimately reallocated from bonds to stocks, the transition will drive up prices dramatically.

Second, the United States will not experience a recession until the 2nd quarter of 2021, at the earliest.

Knowing when the U.S. economy is heading for a recession is paramount to successful investment decisions.  At Trends one of our favorite tools for doing so is the weekly iMarkets Business Cycle Index (or BCI).  A chart in the printable issue shows the BCI in the context of the past seven recessions.  This metric uses the following seven U. S. economic stats:

On average, a 20-week leading recession warning signal is generated when a variant called BCIp, which measures the BCI’s fall from its peak, goes below 25.  As shown in the printable issue, BCIp was at almost 100 in mid-February 2020.  Similarly, a model used by Bloomberg Economics and updated in mid-January estimates the chance of a U.S. recession within the next year at 26%.  This makes sense: an accommodative Fed, low unemployment, high consumer confidence, and benefits flowing from multiple new trade agreements, all bode well for the U.S. in 2020.

Third, based on historic patterns, we will see stronger stock market returns through 2035 because stocks are undervalued relative to bonds.

At J. P Morgan they agree that we are in a secular bull market that will last until the mid-2030s.  A truism of financial markets is that “capital goes where it is treated best.”  To answer this question, we are primarily interested in comparing returns on stocks, bonds and cash, the three biggest and most liquid pools of assets.  The relative free cash flow yield of stocks compared to both government and corporate bonds are especially pronounced in the context of history.  The free cash flow yield of stocks relative to BAA bonds is the most revealing because investors are currently willing to accept the same free cash flow yield on corporate bonds as on equities, a situation that has existed only 6% of the time over the past 66 years.  As J. P. Morgan observes, those time periods, in the early 1950s and since the Great Financial Crisis of 2009, have been followed by very strong equity returns.  We expect history to repeat itself and the high level of fear implied by this spread will normalize as a result of above-average returns inequities.  And,

Fourth, demographic trends will support expected high returns on equities over the next 15 years.

There is a widespread but fallacious belief that as more baby boomers reach retirement age, demographics will present a headwind for equity performance.  On the contrary, data suggest that rather than being a headwind, demographic trends may be quite supportive of high equity returns.  According to a research paper by the Brookings Institute, we can expect to see above-average equity returns when the ratio of 35?to-49-year-olds is increasing relative to 20-to ?34?year?olds and to see below-average equity returns when this ratio is decreasing.  This so-called Middle-to-Young Ratio has only recently started to rise and is set to continue rising until the mid-2030s.  The main premise in the Brookings paper is that middle-aged people have a somewhat inelastic demand for equities given their need to save for various long-term goals.  The variation in birth rates related to

- The baby-boom following World War II,
- the baby-bust of the 1970s, and
- the birth surge of millennials is viewed as an explanatory cause for the variation of the secular bull and secular bear markets, which we described earlier.

The increase in demand for equities due to demographic trends combined with the reduced supply of equities (caused by high levels of buybacks and modest levels of stock issuance) could lead to an even more pronounced boost in equity prices in this cycle.  The Brookings paper also suggests that 35?to-49-year-olds are more productive than other cohorts in the working population.  This assessment makes intuitive sense as 35?to-49-year-olds are likely to have finished their training and gained relevant experience in their chosen professions.  The potential for higher-than-anticipated productivity is supported by two additional factors.

First, given the low level of unemployment in the U.S., it will be uneconomic for corporations to increase output by hiring relatively scarce and expensive employees. Instead, they have a strong incentive to boost productivity by increasing capital expenditures. And,

Second, several trends in technology (industrial automation, artificial intelligence, self-driving vehicles, the democratization of software, genetic sequencing, and so forth) have achieved sufficient scale and are set to modestly boost productivity, even in the medium-term.